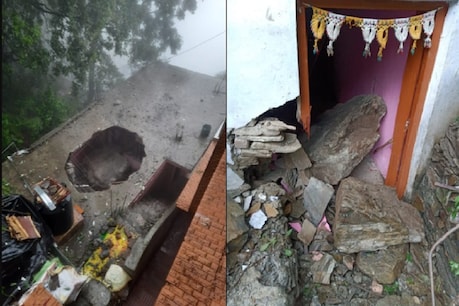 If debris comes from the mountain again in the night, then there can be a big loss.

After the incessant rain, debris came in three houses in Nainital’s Jayavilla compound and big boulders came on top of the houses.

Nainital. The effect of rain on the mountains in Uttarakhand for the last two days is now visible. River drains are in spate and roads have started getting closed due to falling of stones at many places. In Nainital district, 22 roads have been closed during the last 24 hours. Although the district administration is putting JCB to open the roads, but the villagers are facing problems.

After the incessant rain, debris came in three houses in Nainital’s Jayavilla compound and big boulders came on top of the houses. Some big boulders broke the lantern and entered the house, due to which there is a danger of cracks in three houses. However, after the relief, it was that there was no loss of life and property. At the same time, the local people are angry with the action of the district administration. Local DC Pandey says that stone debris is continuously coming from the top of the house, due to which there has been a lot of damage. But even after the complaint, no disaster or district administration teams have reached the spot. And there is concern about how the safety of the family will be done. If debris comes from the mountain again in the night, then there can be a big loss.

Along with this, in Jaurasi of Koshyankutauli also, on the second day a boulder soil came into the house, becoming a threat to the house. But the people of the village themselves removed the stone, and their displeasure was also seen from the district administration. Chatur Singh Mehra, a villager of Jaurasi, says that in the night a boulder came from the hill, due to which the people living in the house narrowly escaped. He says that no administration person has reached here.Life affected due to closure of 21 roads

After incessant rains for the last 4 days, 21 roads are closed due to landslides. 1 State Highway 1, District Highway and 19 rural roads are closed due to stone and soil coming from the hill on the roads. The closure of Ramnagar-Betalghat road has created problems for the people, while the Almora-Haldwani highway has also been disrupted. Along with this, the movement in the area has come to a standstill due to the closure of Haidakhan Kathgodam road. Khairna Betalghat Russian Bypass Hartola Gankhet Pangot Talla Bagad, Kaichi Hatappa Marg are closed due to debris coming in the road. However, the district administration has installed JCB machines to open all the roads. But these roads could not be opened due to rain. At the same time, DM Nainital Dhiraj Garbyal has instructed all the SDMs that immediate action should be taken at the places of disaster and relief should be given to the people.