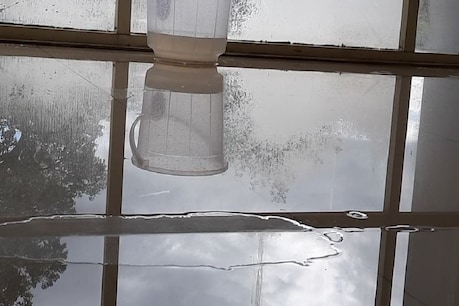 The water in the room filled with lime from the roof at the State Guest House.

Niagara Metals India Company of Ludhiana had constructed this guest house three years ago, but the example of quality is that rain water is dripping from the roof and the arrangement is such that no one cares.

Haridwar. The reality of the quality of construction work of Atal Bihari Vajpayee State Guest House came to the fore within three years. Rain water is dripping from the roofs of the guest house, which was built at a cost of about 17 crores in the year 2017. The special thing is that the rooms of the guest house where rain water is filling are VVIP rooms, in which the Chief Minister and Union Ministers are accommodated. The situation of negligence and delay is that despite repeatedly complaining about the problem to the concerned department, neither any repair is being done and the contract manufacturing company is not even responding to the complaint.

Guest house’s arrangement officer Girdhar Prasad Bahuguna said that many times information was given to the departmental officers for this, but so far the guest house could not be repaired. On his request, Mela Officer Deepak Rawat instructed the PWD officials to repair the guest house. PWD officials have inspected the building several times, although the repair work has not started yet.

read this also : How long will Uttarakhand’s all-weather roads last in heavy rain? Answer found in TehriThe construction was done by the company of Ludhiana

With the fund of Ardh Kumbh 2016, Garhwal Mandal Vikas Nigam, the executive organization, got the guest house constructed from Niagara India Metals Limited, a Ludhiana based company. About Rs 17 crore was spent in the construction of the 24-room State Guest House. After the shortcomings in the construction of the building came to the fore, the officials also wrote letters to the company for repairs, but the company has not taken any care of them yet. At present, the state property department is running the guest house.