Picture of All Weather Road on National Highway in Tehri

Such roads were built especially keeping in view the better connectivity and harsh weather conditions in the state, but the breakdown of a road in Tehri Garhwal has raised concerns, while the local people are in danger.

Tehri. Amidst reports of flooding of rivers and landslides due to rains, especially in hilly areas, another threat has arisen in the state. The rains are hitting the roads and due to the poor quality, the roads have started breaking in many areas. Not only this, even the all-weather roads built on the National Highway are unable to withstand a single season of rain. In Tehri, a large part of the road connecting the tunnel on NH-94 has been broken and cracks in the buttresses have now created a threat to about a dozen houses in the vicinity. It was claimed that this road will work for a long time in every season, but now questions are being raised on the quality.

Under the all-weather project in Tehri, NH-94 was widened and 440 meter tunnel was constructed in Chamba, but now the negligence of the organization which got the contract is taking a toll on the people around. The rain on June 19 broke a major part of the road connecting the tunnel near Guldi village. Due to the rain, cracks have also started increasing in the buttresses and about a dozen houses have been threatened. Local people say that many times they had complained to the BRO and the district administration, but no one paid attention. 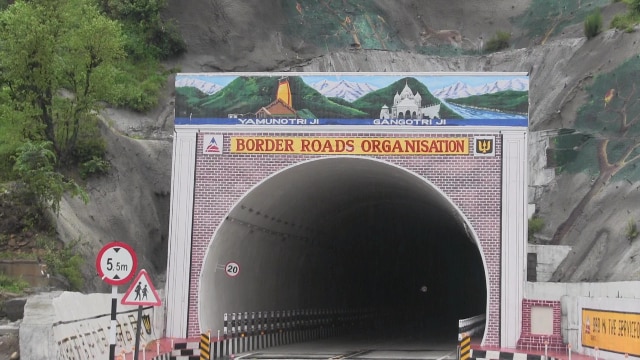 Local people have been continuously complaining to the BRO and the administration regarding the construction of this road.

All weather road could not bear one rain

Under the crores project, the tunnel road built to connect Rishikesh-Gangotri was not even duly inaugurated and the road has been broken in the very first rain. The road is breaking continuously near Guldi village. Cracks are increasing in the buttresses, due to which the local people are seeing the danger of their houses being demolished. People told that the objection was taken only at the time of construction of the road as cracks were visible in about a dozen houses adjacent to it. First the option of one meter wall was given, then it was increased further, but the danger is not averted yet. On the complaints and allegations of the people regarding this, the SDM says that a meeting has been held with the BRO and the potential area will be surveyed by the expert team.

According to the local people, the condition of the road of the All Weather Project in the very first rain has raised questions on the functioning and quality of the working organization. After this, there is a growing concern not only about the district, but also about many such roads in the state.