Mumbai: Bollywood megastar Amitabh Bachchan Are very active on social media. He often keeps posting something on social media. Along with this, he does not miss to share the information of his daily routine with the fans. Recently, Big-B made a post on his Facebook, due to which he had to face trolling of people. He posted fake poetry in the name of two great poets, due to which he came under target of the people.

Actually, Amitabh Bachchan shared a photo from his Facebook account late Monday night. It was claimed in this picture that the two lions written are written by famous poets Ghalib (Mirza Ghalib) and Iqbal. Now the matter is such that both these lions are fake and they have nothing to do with any of the poets mentioned. Amitabh took this picture from somewhere without verifying and without cross checking and put it on Facebook. Now people are trolling him about this. Sharing the picture, Amitabh wrote, ‘Shayari vs Shayari’.

People are trolling Amitabh Bachchan fiercely. Some are asking him to change the teacher and some are asking him to cross check before the post. One after the other, users are constantly trolling Big B and telling his mistake. One user wrote, ‘Change your team Lord, please don’t allow anything to be posted without checking.’ At the same time, another wrote, ‘If Ghalib was alive today, he would have committed suicide after seeing this post. By the way, you should be in Parliament, this kind of poetry in the name of Ghalib looks right there. 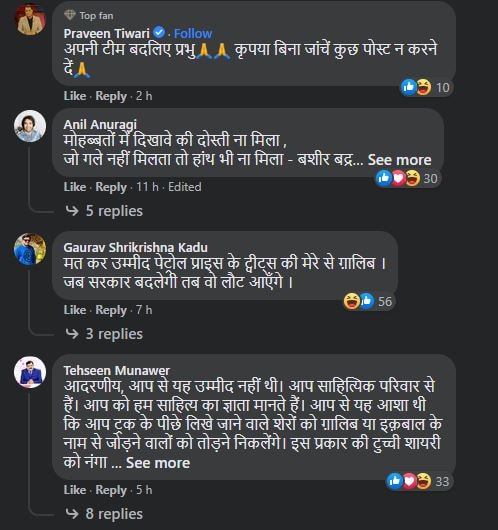 On the work front, Amitabh Bachchan is busy shooting for the 13th season of the quiz show Kaun Banega Crorepati. Apart from this, many of his films are ready to be released and the shooting of some is about to end. The list of his upcoming projects includes many films including Jhund, Chehre, Brahmastra, Mede.