Mumbai: Bollywood actor Ayushmann Khurrana is one such actor in the industry who likes to play out-of-the-box roles. Ayushmann chose challenging role characters in his career and got his films hit. Ayushmann, who has done great films like ‘Vicky Donor’, is once again going to play a new kind of character. When a glimpse of this was seen on social media, fans and friends congratulated him fiercely.

Ayushmann Khurrana is in Bhopal for the shooting of his upcoming film ‘Doctor G’. This is the third film of Ayushmann Khurrana under the banner of Junglee Pictures. Earlier, he has done ‘Bareilly Ki Barfi’ and ‘Badhaai Ho’. The shooting of this film is going on in Madhya Pradesh itself. Ayushmann has shared his first look on Instagram from the sets of the film. In the photo, the actors are seen wearing white coats like doctors, putting glasses on their eyes and giving a smile. She also has a book in her hand on which ‘Gynecology’ is seen written. Sharing this photo, Ayushman wrote, ‘Doctor ji has come out ready. Now the shooting will happen. Next to it is written ‘Doctor ji first look’. On this post of his, some ‘Gentle Man’ is congratulating him for the film by writing a cute one. Ayushmann has shared the exact same photo and caption not only on Instagram but also on Twitter. On this post of the actor, co-star Gajrao Rao has also congratulated Doctor Saab and the staff. Apart from this, the fans have also praised Ayushmann’s look and congratulated him for the film. One fan wrote that ‘Bhai can fit in any character’. 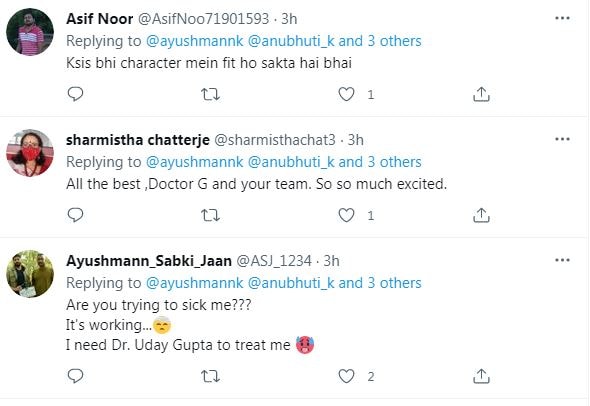 Directed by Anubhuti Kashyap, ‘Doctor Ji’ stars Rakul Preet Singh with Ayushmann Khurrana. It is believed that like Ayushmann’s other films, this film will also be full of entertainment and giving a social message.