Mumbai. Bollywood actress Sonam Kapoor Returned to India a few days ago. The actress has remained in the news since her return to India. Sonam is very active on social media. Recently, the actress introduced the fans to the new member of her house. Sonam is very happy with the arrival of this new member.

Actually, the actress Sonam Kapoor Sharing a picture on Instagram, introduced him to the little guest who came to his house. The new guest at Sonam’s house is a dog. Sharing the pictures, Sonam Kapoor wrote, ‘Let me introduce you to the newest member of the Kapoor family – Russell Crowe Kapoor. Here’s a glimpse of my happy moments with him. Sonam has shared pictures with Doggy, in which she looks very happy. 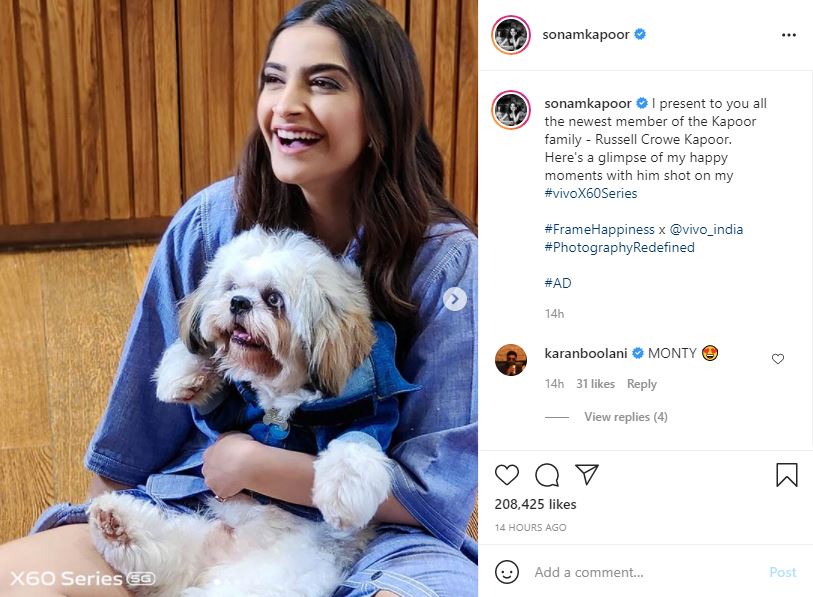 Sonam Kapoor introduced the fans to the new member of her house. photo credit: @SonamKapoor instagram

In the picture, Sonam Kapoor is seen wearing a denim long dress. Not only this, he is also wearing a matching dress to his puppy. Let me tell you Sonam, before this, Sonam was in discussion about the news of her pregnancy. After which she broke the silence on the news of pregnancy. Sonam Kapoor shared a boomerang video on her Instagram story, in which she was seen sipping a hot drink. She captioned the story, writing, “Hot water bottle and ginger tea for the first day of my period…” Sonam Kapoor introduced the fans to the new member of her house. photo credit: @SonamKapoor instagram

Remind that Sonam Kapoor was living in London with husband Anand Ahuja for the last several months. The reason behind this was both Corona and her husband’s business. Many times in her posts on social media, she used to share that she is missing her home, family and India very much.