Akshay Kumar wrote, ‘This is what Aanand L Rai and I did throughout the shooting of Rakshabandhan – we laughed like there’s no tomorrow here! But, as the shooting of the film wrapped up in Delhi last night, it was a bitter hue of sadness. Now again a new day, a new roller coaster.

Let us tell you that Bhumi Pednekar is also in the lead role in this film. The film will be released on the weekend of Independence Day on 11 August 2022. Himanshu Sharma and Kanika Dhillon have written this film. The film is being produced by Color Yellow Productions, Zee Studios, Alka Hiranandavi and Cape of Good Films. 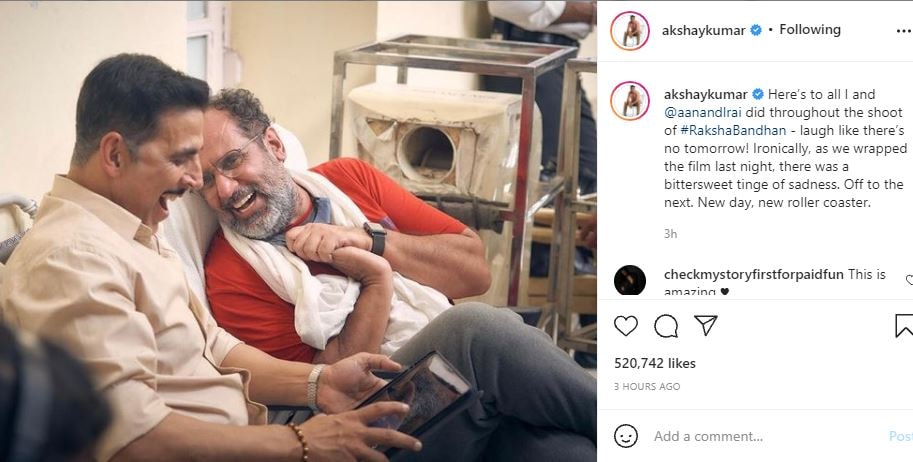 Akshay Kumar announced this film on the occasion of Raksha Bandhan last year. He dedicated this film to his Alka. At the same time, Alka had said that this is the sweetest gift from Akshay (whom she affectionately calls Raju). Revealing about Akshay Kumar, he had said, ‘Mummy-daddy used to tell me that if I want to go to a late night party or stay out till late, then I have to take Raju along. But he never used to accompany me and used to say that you have to take responsibility for your own safety.

She had said, ‘I always used to ask him why? I have also missed many parties because of this. He had also said that after his father passed away, Akshay gradually took over the responsibility of the entire family.

Let us tell you that many films of Akshay Kumar are ready for release and many are in the final stages. It includes ‘Sooryavanshi’, Prithviraj, Bachchan Pandey, Atrangi Re and Ramsetu.