New Delhi. Actor Karthik Aryan, who made a bang in Bollywood with the film ‘Pyaar Ka Punchnama’, has more than one film at the moment. Her upcoming projects also include ‘Shehzada’. The shooting of this film, directed by director Rohit Dhawan, has already started. Also, now the release date has also been announced.

According to reports, this film of Karthik is a family action-packed musical film. A few days ago, director Rohit Dhawan had said that the famous music director Pritam has also been associated with this film. This means that the music of the film is going to be excellent. Apart from Karthik-Kriti, the film also stars Paresh Rawal, Manisha Koirala, Ronit Roy and Sachin Khedekar. Paresh Rawal and Manisha Koirala have earlier appeared together in the film ‘Sanju’. 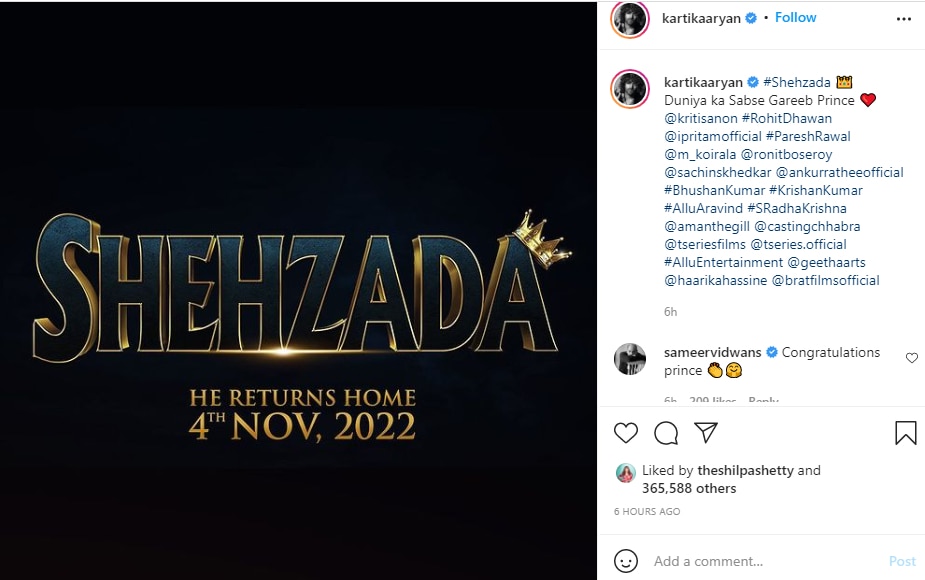 Bhushan Kumar, Allu Aravind and Aman Gill are jointly producing the film. Recently, producer Aman Gill said in one of his interviews, ‘Director Rohit was working on Shehzada for the past one year. Together we all want to make this film grand. Significantly, this film is a remake of South’s superhit film ‘Ala Vaikunthapuramulu’. Allu Arjun was the hero in the original film.

If we talk about Karthik’s upcoming films, then he has recently completed the shooting of the film ‘Freddy’. Along with this, the release date of the film ‘Bhool-Bhulaiya-2’ has also been fixed. This film will be released next year. At the same time, Karthik also has high hopes from his upcoming film ‘Dhamaka’.