Bollywood actress Sonam Kapoor is enjoying her pregnancy period a lot these days. She is in the last stage of her pregnancy. Let us tell you that these days Sonam is in her mom-dad’s house in Mumbai. Meanwhile, Sonam has shared a picture on Insta Story. After seeing this, his fans have become upset. On the other hand, there is also news that Sonam can become a mother anytime in this month. According to media reports, she will give birth to her child in Mumbai and will stay at her father Anil Kapoor’s house for a full 6 months.

First let’s talk about Sonam’s Instagram story, in the latest photo shared by the actress, you can see her lying on the bed. In the photo, her swollen feet due to pregnancy can be seen. Sharing this photo, Sonam told that pregnancy is not easy. She writes in the caption ‘Sometimes pregnancy is not beautiful’. 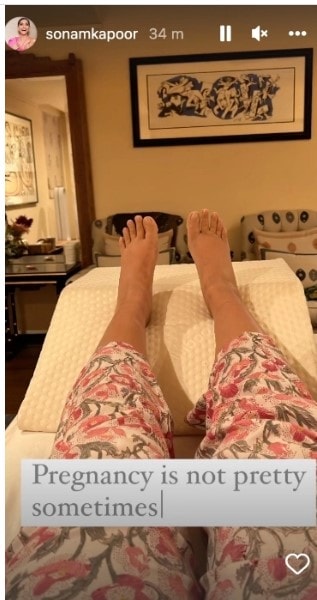 Will stay with my mom and dad for six months
Updates have come out in the media reports regarding Sonam’s pregnancy, in which it is said that Sonam will give birth to her child in Mumbai. It is also being told that Sonam Kapoor will live with her parents for at least six months after giving birth to her first child. After this, she can go to her Delhi or London in view of her personal and professional life.

Preparations are being done in the family
Let us tell you that Sonam Kapoor married London based businessman Anand Ahuja on 8 May 2018. After nearly four years of marriage, Sonam shared her pregnancy with Good News fans in March 2022. Sonam-Anand’s family is very busy preparing for the arrival of the upcoming child. The actress is sitting desperate to hear the cries of her upcoming baby.